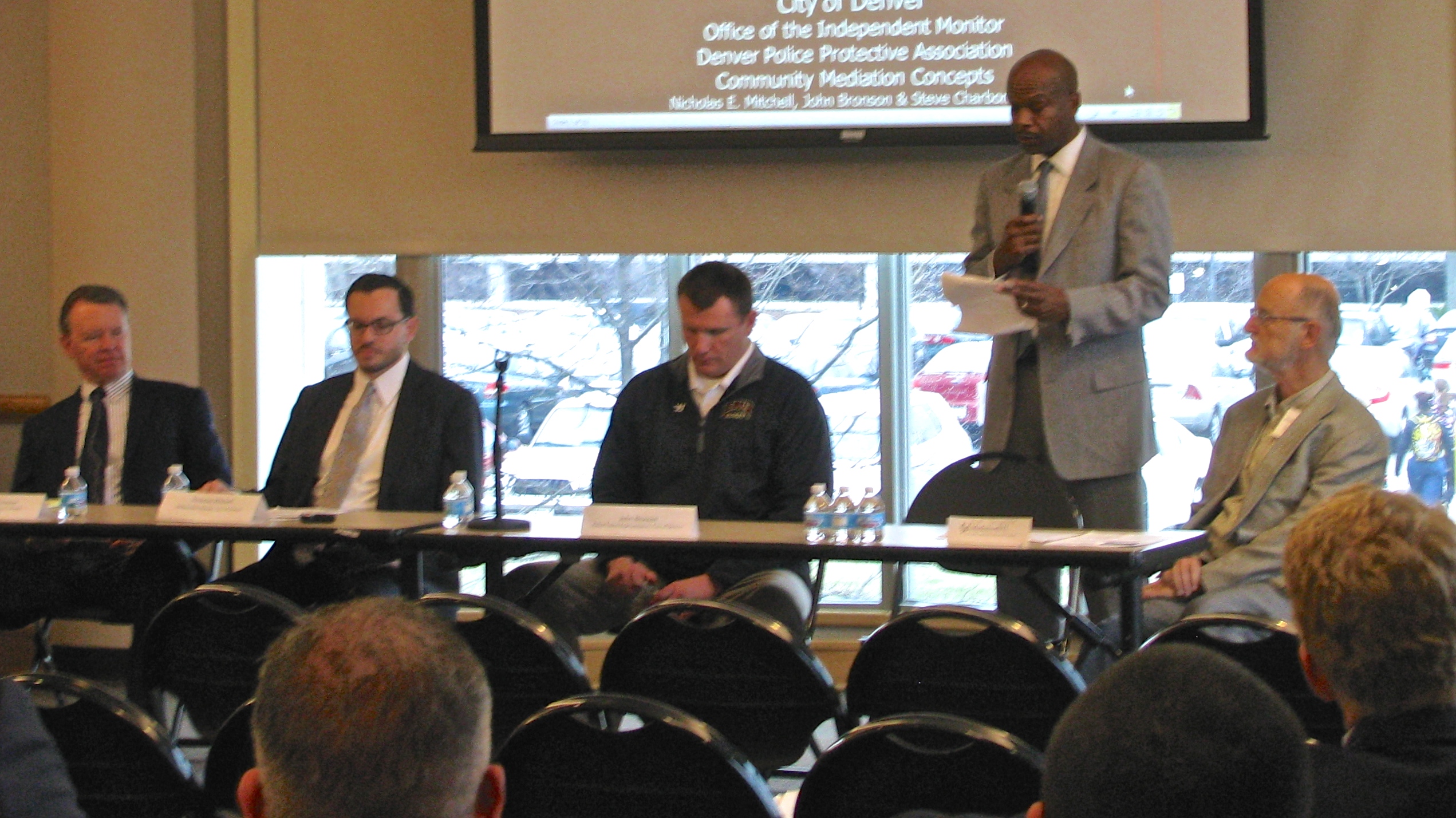 On Monday, March 31, 2014, MediationSTL joined with the Department of Criminology and Criminal Justice, UMSL and Community Mediation Concepts of Denver, CO, to present a forum on Police Community Mediation. Police leadership from throughout St. Louis City and County were in attendance to learn about the immense potential of such a program. The panel consisted of Steve Charbonneau, Director of Community Mediation Concepts (Denver), John Bronson, Vice President of Denver’s Police Union, Nicholas Mitchell, Independent Monitor for the City of Denver, UMSL Criminology Professor and former Chief of St. Louis Police Dan Issom of UMSL, and John Doggette of MediationSTL.

Charbonneau recounted the initiation of a police community mediation program in Denver more than a decade ago as a response to a system of complaint management that was broken and unsatisfactory on many levels. Citizens who would complain to police departments often felt powerless as they would receive minimal follow up regarding their grievance. Officers who were reprimanded or investigated regarding complaints from citizens felt that they were being punished for relatively minor incidents for which they had no opportunity to explain themselves, Charbonneau said. 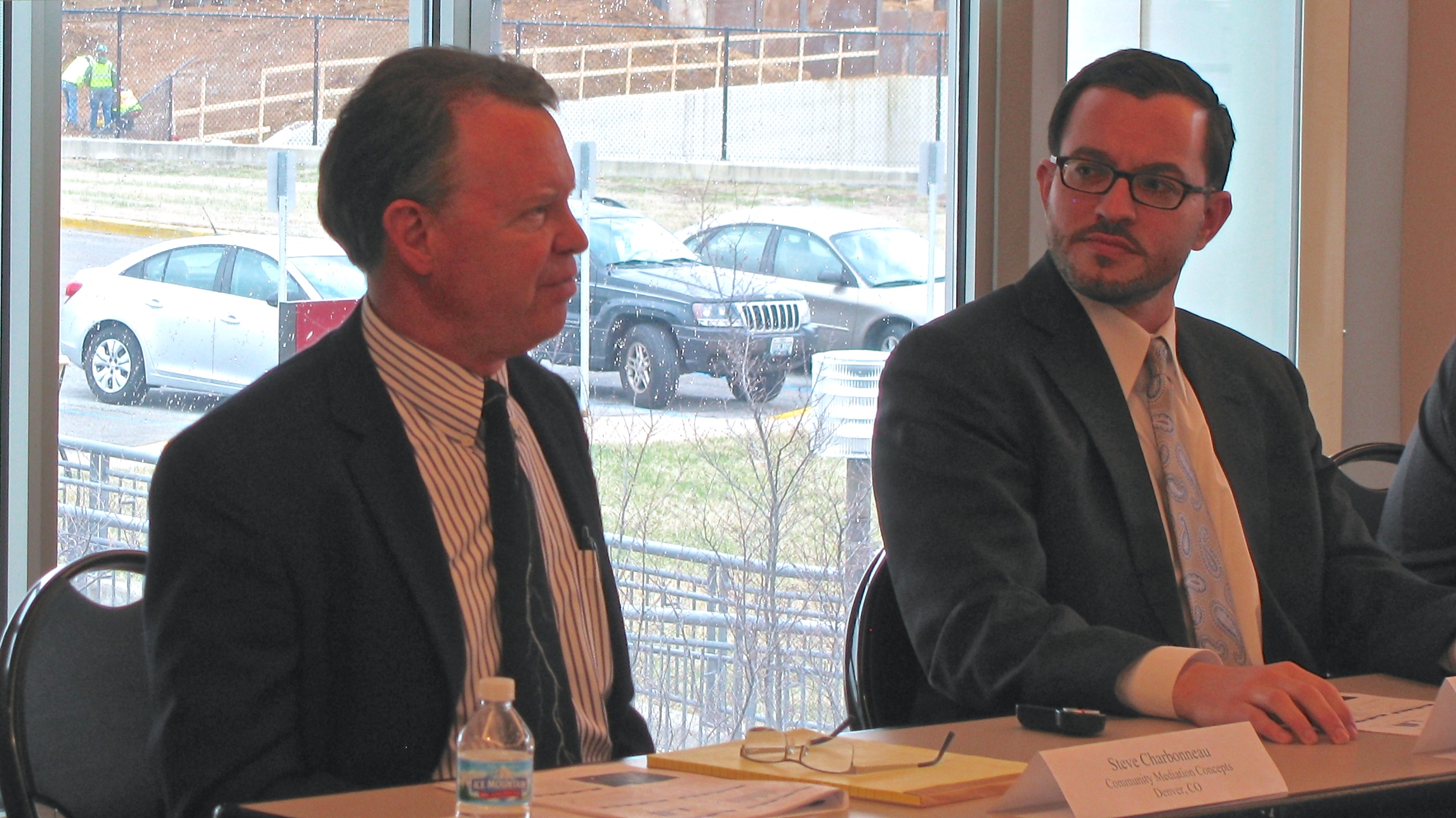 According to evidence the panelists presented, police community mediation has proven to be an all around win-win for Denver. According to surveys conducted after mediation, satisfaction rates approach 90% for all parties involved. Mitchell noted that citizens embrace the opportunity to address officers directly with their concerns. The experience was often a turning point in helping parties resolve tensions that could have otherwise contributed to strained relations with the police department.

Incidents that go to mediation do not typically involve violence or significant breaches of ethics, Bronson said, but rather involve tense situations where citizens have found fault with officers’ etiquette. Bronson stated that officers often appreciate the chance to both listen to complainants and talk with them directly. Bronson also observed that the ability to mediate cases has helped the Denver Police Union significantly reduce its legal fees and liabilities for minor offenses. Charbonneau noted that the process of mediation is generally more effective than other disciplinary methods for the cases in which it is used. Typical turnaround time for mediation is usually under a month, according to Charbonneau. Meanwhile, internal affairs investigations can take considerably longer and use more resources. 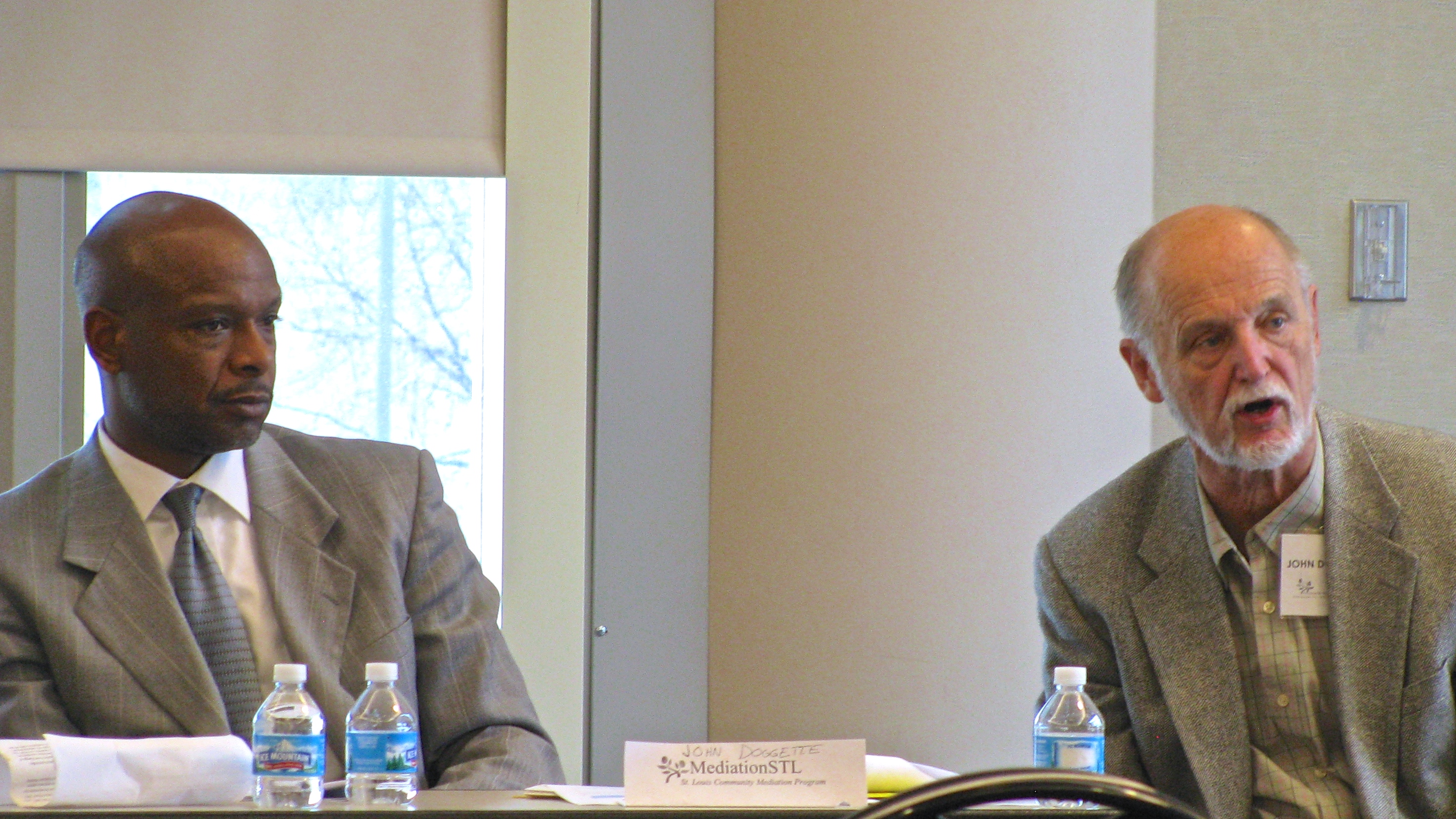 MediationSTL Executive Director John Doggette stated that our own community mediation program has been doing community-police mediation for several years. Case numbers for community-police mediation have not been high so far, only a representing a small subset of the mediations that MediationSTL has done over the past couple of years since the pilot program’s beginning. However, the potential is phenomenal. Doggette noted that we are the largest city without a publicly funded community mediation program, and that his aim is to change that.

The audience was highly engaged throughout the event and asked important questions of the panelists, some of which are below:

Q: Is the outcome of a mediated agreement legallybinding?
A: Although many mediations work toward an agreement, Police Community Mediation does not have that goal.  Instead, the goal is for two parties to engage in dialogue to share their perspectives of an issue.

Q: What is the timeline for a Police Community Mediation?
A: About 45-60 minutes of mediation time. Typically two to three weeks before that to arrange the mediation.

Q: What is the screening process?  How does it relate to the use of force in a given dispute?
A:  There is no standardized screening process to determine which cases are suitable for mediation.  The mediators must rely on a good working relationship with the Department of Internal Affairs, as well as good personal judgment in order to make decisions on a case-by-case basis.

Q: Has the training division embraced methods and lessons from mediation?
A: It is not certain to what extend, if any, mediation experiences influence the training process.  Almost 30% of the complaints have related to issues of courtesy.

Q: If officers’ disciplinary processes are resolved and complaints dismissed through mediation, are charges also dismissed for the citizen?
A: Citations are not considered part of the mediation, and the mediation has no determining factor in legal cases relating to those charges. However, in the experience of Community Mediation Concepts, judges often tend to view an individual’s willingness to attend mediation favorably.

Q: How does mediation affect lawsuits?  Do lawsuits arise after mediation?
A: Mediation has no affect on lawsuits.  Participants may choose to drop lawsuits as a result of mediation.  Once a mediation has happened, a continued lawsuit is rare.  As for lawsuits arising out of what is said during mediation, enforcement of the confidentiality requirements in the Agreement to Mediate, which both parties sign to begin the mediation, and without which mediation cannot happen, is key.

There are no upcoming events.

Please help us in our goal to make community mediation a sustainable service to residents of St. Louis. Every donation helps toward covering our expenses.